The Chugwater Museum staff and volunteers are working on a project to preserve photographs and documents. Because many of the historic photos and documents are beginning to decay, it was urgent that they be digitally copied. In 2011 a Wyoming Cultural Trust Fund was granted to the museum to save the thousands of copies stored at the museum. To date, the project volunteers have scanned and digitally stored over 3000 images of photographs, newspapers, documents, letters, and personal and government records. Eighteen volunteers have worked 850 hours to save 1,800 photos, 460 documents, 100 letters, 20 newspaper pages, and 720 records of various types.

The museum will accept any photos or documents to digitize for preservation that community members may wish to add to the collection. We also are looking for volunteers to assist in this endeavor. For more information, contact either Beauford Thompson at (307) 369-2872 or Carol Eckhardt at (307) 422-3334. 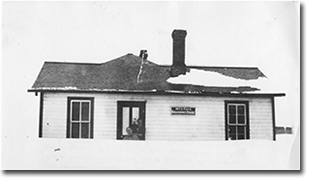 This is Mrs. Della Fox's Boarding House that was originally known as the 2-Bar Cook Shack. She operated the boarding house for the Swan Land and Cattle Co. in the early 1900's where travelers and cowboys occasionally slept and ate.

Originally, Della ran a hotel (in one map is identified as the DeFox Hotel) in Chugwater that later became the Hart Hotel. She also homesteaded two parcels of land. After 1913, she leased the hotel to another Chugwater citizen (Mrs. Williams) and moved to her homestead with her husband, Walter. The Swan Company was without a steady cook who could prepare "presentable meals". In desperation, Curtis Templin pleaded with her to take the job at the Cook Shack. She was persuaded, but insisted that her name be on the building. This picture was taken later than 1917, since the young boy being held by Mabel Ward was born that year. Grandma Fox is looking over a wintery Chugwater snowdrift.

Chugwater was a cattle shipping center? Ranchers in the area shipped cattle to eastern stockyards from the railroad station at Chugwater. This was important to the economic development of the area because it allowed direct access to those buyers, reduced the need to move cattle to other shipping points, and increased profit margins.

It is claimed that Chugwater became an early grazing area for the first Hereford cattle in Wyoming. These breeds became popular because they were hardy, fattened quickly, produced better cuts of meat than the longhorns, and were easy to handle. The nutritious grass of the valley and prairie produced fat cattle that held their weight longer on long trips to markets such as Chicago. 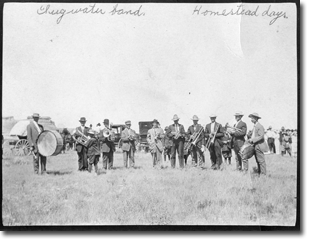 A Chugwater Band was popular before the Chugwater String Quartet? This picture shows a band designated as the Chugwater Band during homestead days. From the member's dress it appears that the picture was taken during the late 1890's or early 1900's. Also, since no automobiles are present, it suggests that it was before their time. The formation in the background looks to be the bluffs near Chugwater. This event may have been an inter-community gathering that was popular for social gatherings. If you are interested in early music making, the Chugwater Museum has several early pictures of musicians and musical instruments. From John Voight photo collection. By Beauford Thompson.

That a Jewish community was established near Iowa Center (east of Chugwater) by the Jewish Agricultural Society (JAS) in the early 1900's? Several Jewish communities were started in Wyoming including the one at Iowa Center. Their purpose was to encourage agricultural activity among Jewish families. Because of increased immigration from the Old World, Congress considered immigration reform to lessen the impact on urban areas and local economies. Leaders of the JAS realized the West and South were opportune areas to place Jewish people as farmers. Many Jewish settlers became successful and helped communities grow and prosper.

Unfortunately, the JAS failed to realize that traditional methods were not adequate for dry land farming, including the lack of irrigation near Chugwater. By 1933 most of the farmers had given up and moved on to other opportunities.

For more information about Jewish settlements near Chugwater or in Wyoming, see Jews In Wyoming by Carl V. Hallburg; or, Peopling the High Plains: Wyoming's European Heritage, Edited by Gordon Olaf Hendrickson. The Chugwater Museum can assist anyone seeking information or records of Jewish information. 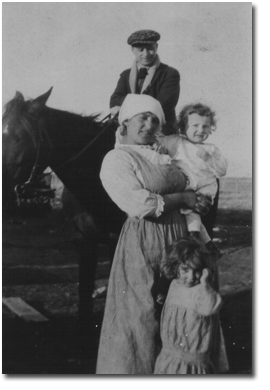