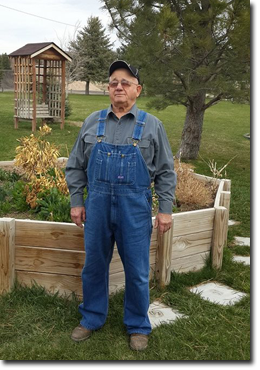 Our 2014 community hero award goes to Milton Green from Chugwater who has won the hero award from the WAM Association. Milt along with his wife Maryanne moved to Chugwater in 1983 and from that moment forward Milt has been an outstanding volunteer. With all the projects Milt has accomplished in Chugwater the most recent is the Chugwater Park(s) and statues for our American Legion Park (pictures enclosed).

Milt's spent most of his life working on ranches and loved watching the world from the seat of a horse. His stories of being kicked by a horse and cattle and some of the escapades he had has brought life to the past in our area. After moving into Chugwater in 1983 he and his wife owned the Wagon Wheel CafÃ© in Chugwater. Milt never turned down an opportunity to help a stranded motorist or a resident or the town. No matter what, Milt never asked for compensation or recognition, and is always the first to offer a lending hand. 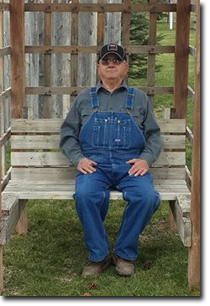 Some of Milt's projects have been the wood message bulletin boards located at the Town Hall, Post office, and the Community Center, the wooden gateways into the park, 2 wooden flower beds, gazebo park bench, podium for the Community Center's church service, and he made the newest elected mayor her very own gavel. All of these projects he does without any plans. He designs them all on paper and in his head and then makes them.

Milt also placed the donated statues for our American Legion Park. What makes his volunteer work so outstanding is that he is 81 years old in June. Milt continues to be an award winning resident, a helpful neighbor, and a cherished man.

December 30, 2012 Chugwater's only Fueling Station was ran into causing a fire that burned the building down. That evening the store was being manned by three employees. Bob Mosley ("Cowboy Bob") was making a purchase at the register when the vehicle came through the front door and nearly ran into him. Mosley immediately noticed a fire starting under the vehicle. He asked the workers to grab the fire extinguisher but the ladies did not know how to work the extinguisher. The employees were all in panic mode. Mosley grabbed the fire extinguisher off the wall and attempted to put the blaze out. When they realized they were not going to be able to stop the fire he made sure the employees as well as everyone else was out of the building and safe. His calm influence helped the the employees of Horton's Corner get out of the building safely.

We thank Mr. Mosley for his courage in the face of danger. As well as his level head to get everyone to safety!